Close
Back to top

published by Alan Taylor – Senior Editor at The Atlantic,

Entrants in this year’s contest were invited to submit images showcasing the Earth’s biodiversity, and showing some of the mounting threats to the natural world. These images originally appeared on bioGraphic, an online magazine about science and sustainability and the official media sponsor for the California Academy of Sciences’ BigPicture Natural World Photography Competition. The organizers were once more kind enough to share some of the winners and finalists here. The captions were written by the bioGraphic editorial staff and lightly edited for style. 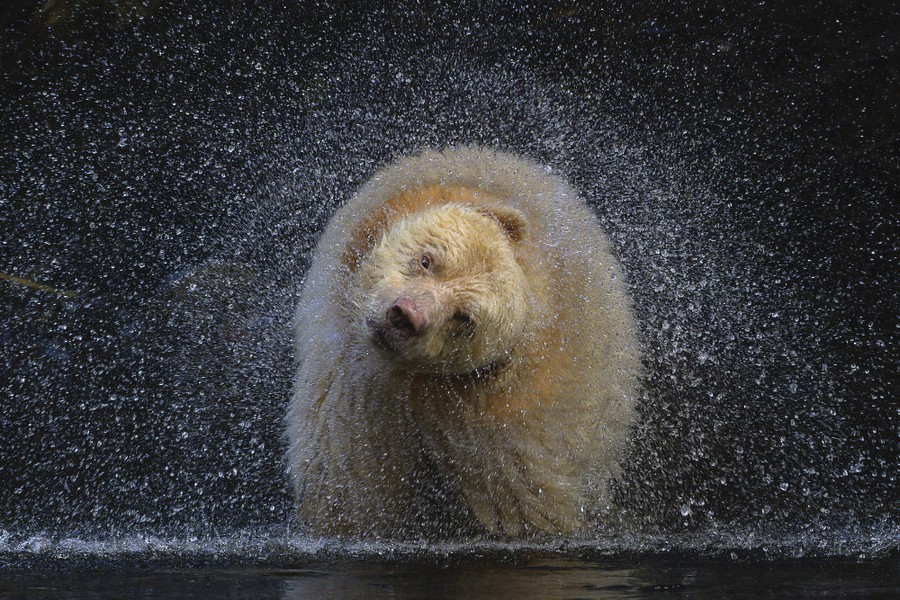 Boss. Terrestrial Life Winner. On a remote island in northern British Columbia, photographer Michelle Valberg crouched low to the ground, trying to remember to breathe. Several meters in front of her, a Kermode bear—a subspecies of the American black bear—had plunged its head into a river in search of salmon roe, and she knew what would likely happen next. When the large bear needed a breath, he pulled his head out of the water and shook, sending sparkling droplets of water spiraling around his head. While most of the Kermode bears that roam the region’s coastal islands are black, about 10 to 25 percent are white. This distinctive coloring is not an albino condition, since the bears have pigmented skin and eyes. It is, however, an inherited trait that is fully recessive, and scientists had long wondered why white-morph bears—often called spirit bears or ghost bears—were so common on the islands. In 2009, a team of researchers from the University of Victoria monitored salmon-fishing proficiency among both black and white Kermode bears and found that while black bears were slightly more successful when fishing at night, white bears were significantly more successful during the day. Spirit bears, like the one Valberg photographed, are highly conspicuous from a human standpoint, but this is not the case for a salmon looking up through the water. Against a bright sky, a white predator is actually less conspicuous than a dark one. 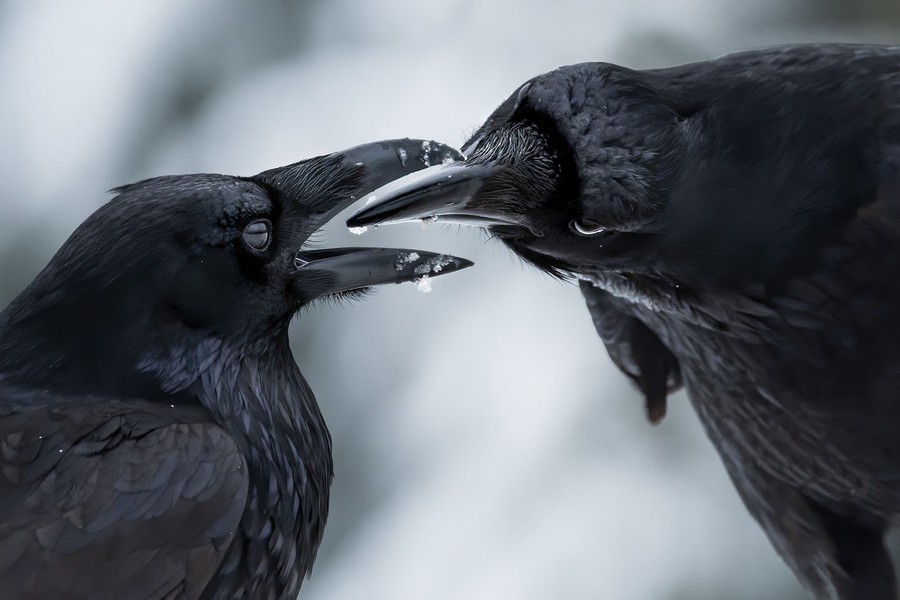 Beak to Beak. Winged Life Winner. Common ravens usually mate for life, and this intimate, open-beaked moment captured by photographer Shane Kalyn is likely an example of allopreening—reciprocal grooming that serves both to solidify social bonds and to keep plumage clean. Tender as this behavior is, it sometimes puts the birds at risk of an aggressive intervention from other members of their species. A 2014 study by scientists at the University of Vienna revealed that ravens will often interrupt grooming sessions between other paired individuals, especially those with more tenuously established bonds. These interventions are an apparent attempt to prevent neighboring couples from developing the kinds of strong pair-bonds that lead to greater reproductive success. 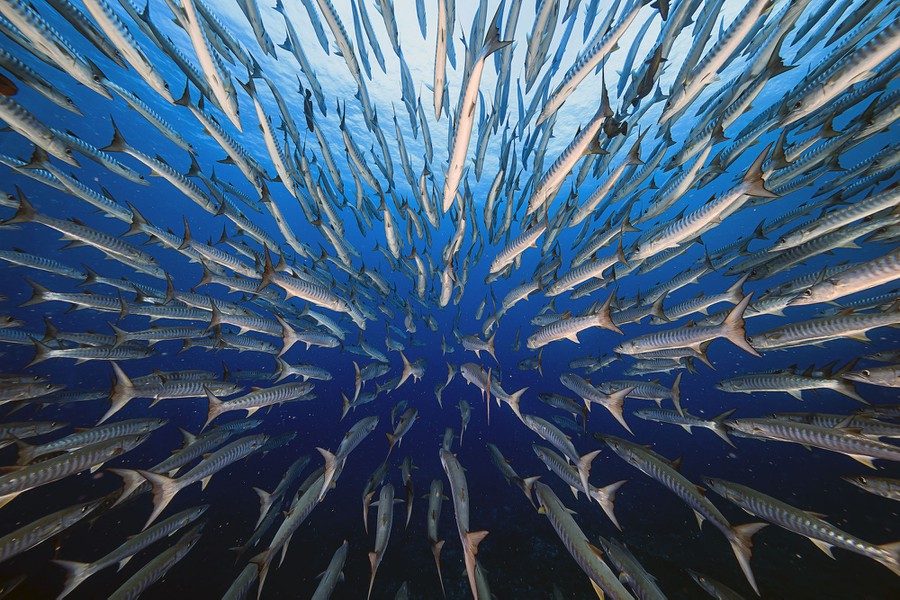 New Kid in School. Aquatic Life Winner. With mountainous reefs, more than a thousand species of tropical fish, and several species of coral-dwelling sharks, Palau’s Blue Corner is considered one of the best dive sites in the world. However, currents that change speed and direction at a moment’s notice can sap even the most experienced diver’s energy and send them hurtling toward the reef or out to sea. Given these turbulent conditions, it’s hard to imagine that underwater photographer Yung-Sen Wu didn’t feel a tinge of jealousy at the effortless swimming of the streamlined barracuda he was there to photograph. The barracuda were slow to acclimate to Wu’s presence. Over the course of five days, however, Wu braved the Blue Corner’s currents daily in an effort to gain their trust, finally being allowed into the school on his last day there to capture this striking image. 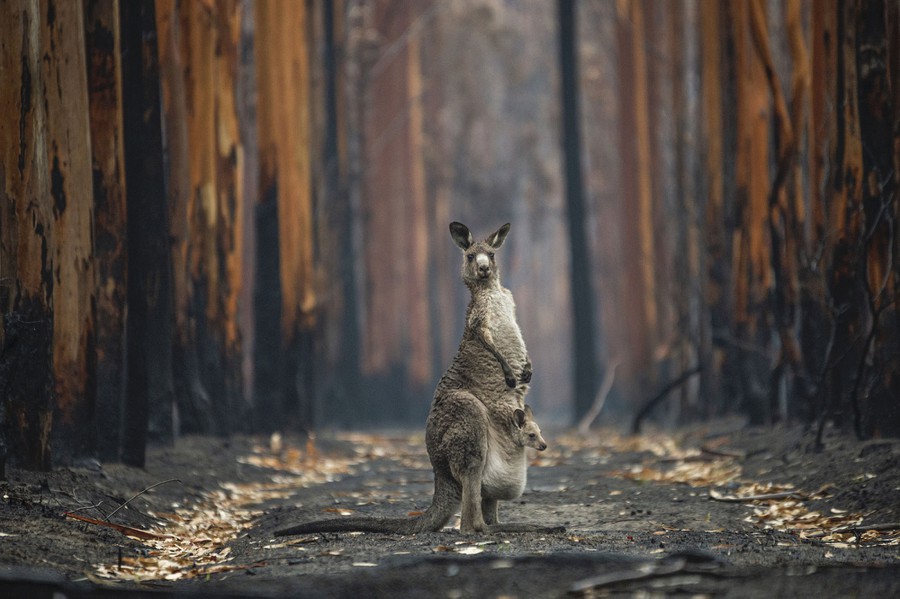 Hope Amidst the Ashes. Grand Prize Winner. Bushfires have ravaged the Australian landscape in recent years, burning some 42 million acres in 2019 and 2020 alone. Driven by record-setting droughts and temperatures, wildfires have devastated habitats and wildlife populations alike, and scientists are worried that these events will only grow more common with climate change. In January of last year, shortly after a devastating bushfire near Australia’s southeast coast, photographer Jo-Anne McArthur accompanied a team from an organization called Vets for Compassion as they searched a eucalyptus plantation for injured and starving koalas. There she encountered this female eastern gray kangaroo, a joey in her pouch, that had somehow survived the cataclysm. For McArthur, it was a powerful moment: two of Australia’s most iconic species—the kangaroo and the eucalyptus tree—standing at a worrisome crossroads in their history. But the individuals in her frame were also symbols of hope that life can persist against all odds. 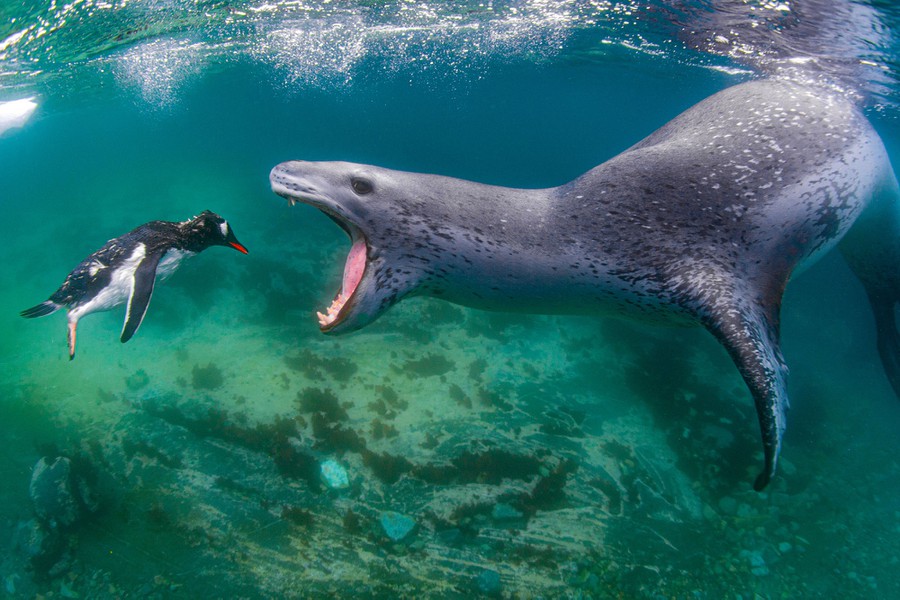 Facing Reality. Aquatic Life Finalist. With their silky coats, big, dark eyes, and perpetual grins, leopard seals can look downright cuddly lounging on Antarctic ice floes. It’s safe to say, though, that penguins have a different perspective on these powerful apex predators. Weighing up to 1,320 pounds (600 kilograms), with powerful jaws lined with sharp teeth, leopard seals are capable of catching and subduing a wide range of prey. Studies have shown that leopard seals feed on everything from krill, fish, octopuses, and crabs to penguins and other seals. A recent study conducted on the Antarctic Peninsula, not far from where photographer Amos Nachoum captured this image of a leopard seal preying on a young gentoo penguin, found that penguins make up about a quarter of the leopard seal’s diet throughout the year. 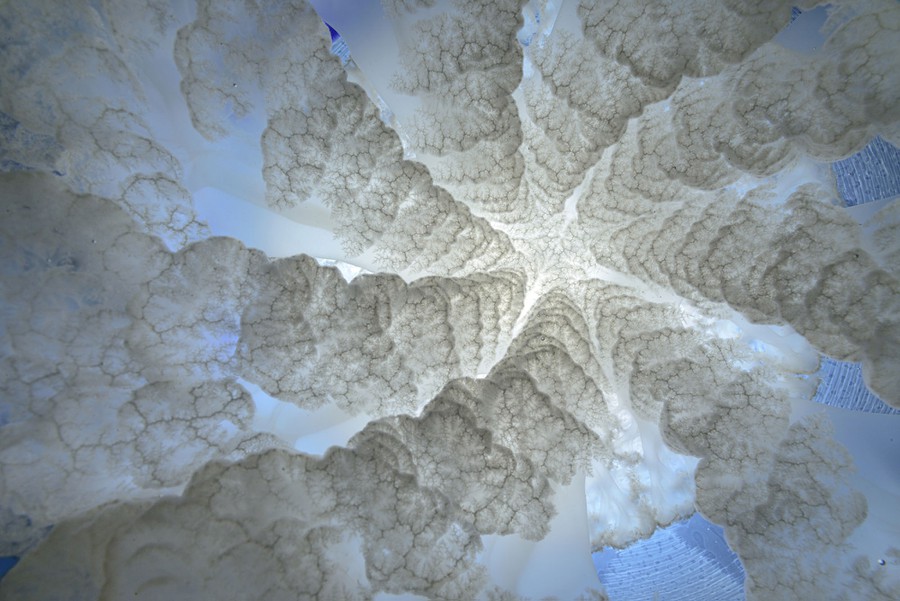 Down the Hatch. Art of Nature Finalist. This beautiful and mesmerizing view may very well be the last thing that many hapless ocean-going creatures see before falling victim to the barrel jellyfish. Also known as the dustbin-lid jellyfish for the size and shape of its bell when washed up on U.K. shorelines, the species is one of the largest jellies in the world, reaching 35 inches (90 centimeters) or more in diameter. While most often seen dead and flattened on beaches, in the water the barrel jellyfish’s translucent bell takes on a mushroom shape, fringed with a brilliant violet ribbon of sensory organs. Eight frilly arms trail behind the bell, subduing prey and pulling it toward the jellyfish’s mouth. By backlighting his shot, photographer Angel Fitor was able to capture those arms here in intimate and ominous detail. 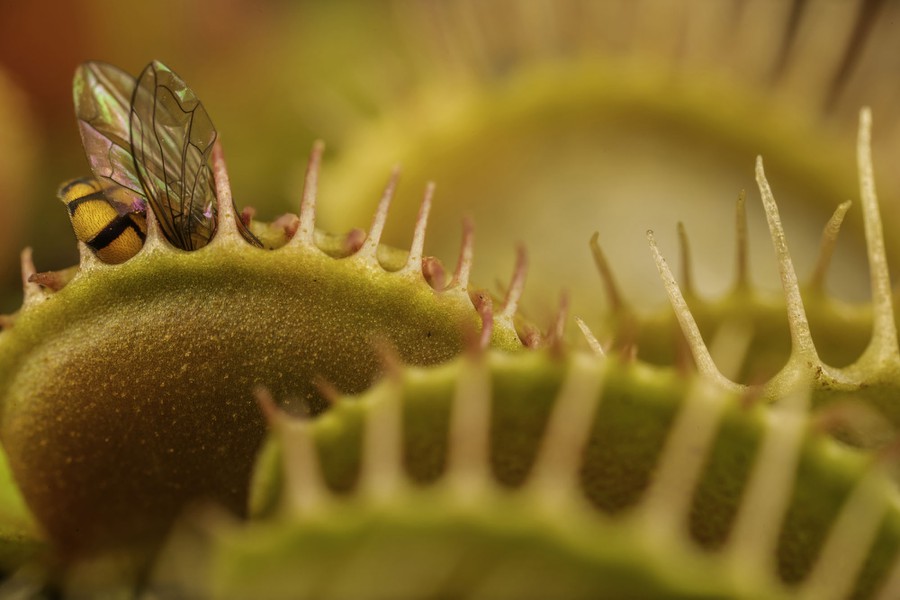 Nutritional Supplement. Landscapes, Waterscapes, and Flora Finalist. Despite its modest proportions and rarity in the wild, the Venus flytrap is one of the most recognizable plants in the world. That popularity has driven a lucrative market in cultivated plants—and sadly, the poaching of wild ones as well. In its native longleaf pine forests of the Carolinas, the species makes its living much like other plants, harnessing energy from sunlight to make its food. In contrast to many other plants, however, the Venus flytrap must also catch vital nutrients that are missing from the soils in which it grows. With hinged leaves that snap shut at the slightest touch of hairlike triggers on their surfaces, it’s highly specialized to do just that, as this hoverfly going about its business in a North Carolina forest last November learned the hard way. 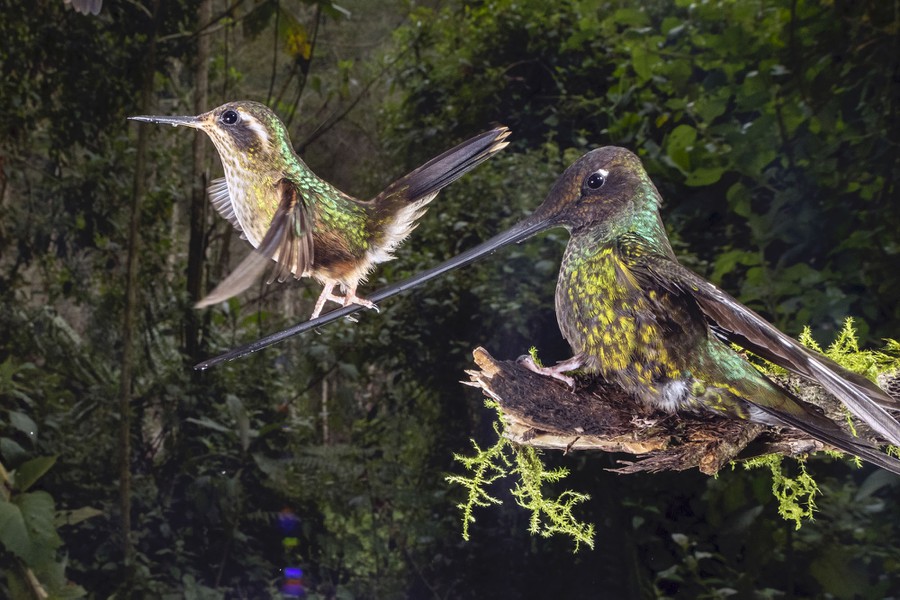 Taking a Load Off. Winged Life Finalist. While there’s no particular shortage of perches in the Ecuadorian highlands, few seem as tailor-made for little feet as the long, slender beak of a sword-billed hummingbird. What might appear to be a youngster taking a break under the exasperated gaze of its parent turns out to be a bird of a different feather: an opportunistic speckled hummingbird simply looking to save a little energy. For hummingbirds, especially species that live in the cool and wet Andean cloud forests like these two, calories—those they consume and those they conserve—are key to survival and reproduction. After all, tiny though they are, it can take hundreds of flower visits per day to keep a hummingbird running. So a conveniently placed perch, and one that comes with its own predator-detection capabilities, is hard to pass up. 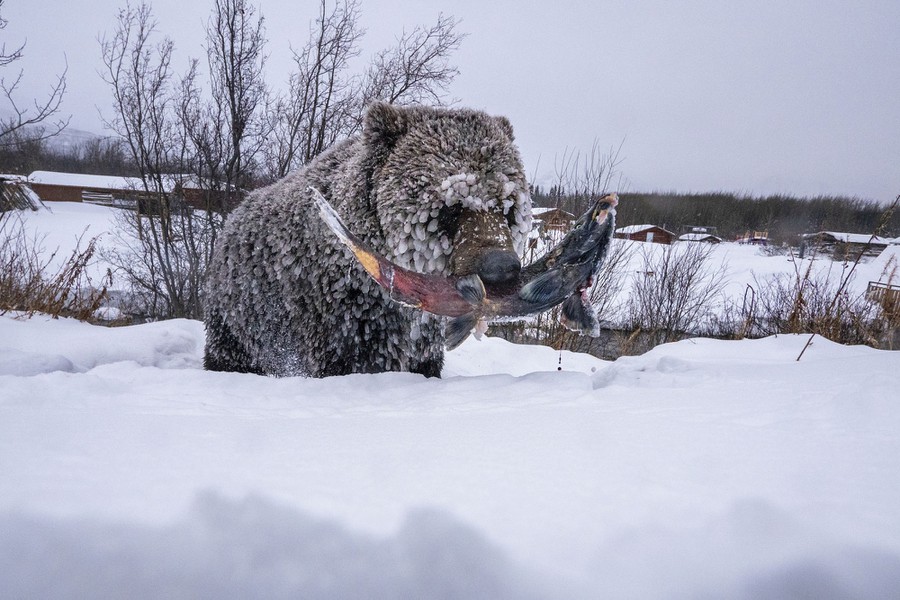 Ice Bears. Photo Story Winner (one of six images). In Canada’s Yukon Territory, grizzly bears delay their hibernation to catch the last salmon runs of the season. As temperatures drop below –4 degrees Fahrenheit (–20 Celsius), the grizzlies’ water-soaked fur freezes into a chandelier of icicles that jingle with each step. Local Indigenous peoples tell stories of arrows unable to penetrate the icy armor of the bears. Unfortunately, Yukon’s ice bears, as they are known, are facing new threats for which their armor is no match. Climate change and other human activities are leading to sparse salmon runs, reduced river flows, and shorter winters, all of which put the ice bears’ way of life in jeopardy. 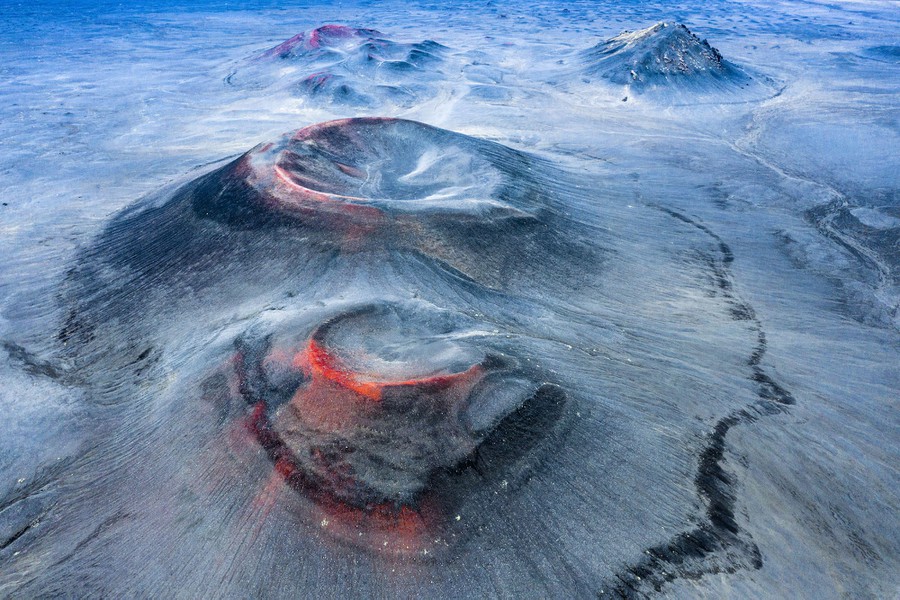 Another Planet. Landscapes, Waterscapes, and Flora Winner. What looks at first glance to be lava flowing down the sides of these Icelandic volcanoes is, in fact, iron oxide deposited during past eruptions. The last eruption here in Fjallabak Nature Reserve took place in 1480. The climate in the reserve is arid and cold, and the growing season is limited to about two months a year, so vegetation is scarce, and mineral-streaked mountains provide the landscape with much of its color. Photographer Fran Rubia was awed by its stark beauty, especially when he first saw it from above. “When I lifted the drone for a reconnaissance flight, I was surprised by the large amount of iron oxide inside the volcanoes,” he says. The photograph he captured later that day made him reflect on the importance of preserving such places. “Because the image seems to be photographed in another world, on another planet, it seemed to me a primal place without any human alteration, which made it even more special.” 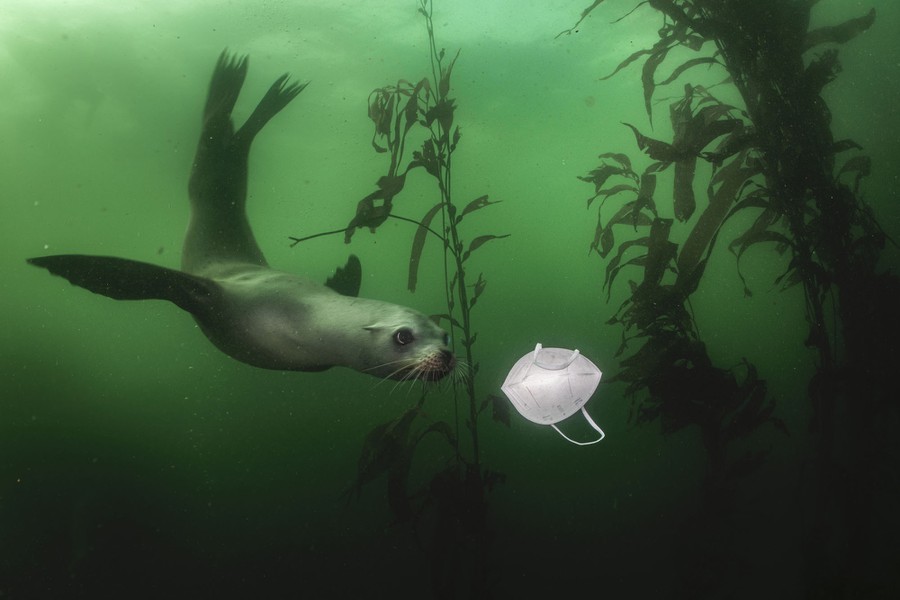 Sign of the Tides. Human / Nature Winner. Though a post-pandemic world is finally in sight, the scars of COVID-19 will live on for years to come—including those on our environment. Since the start of the pandemic, the production of single-use plastics skyrocketed, driven in part by the surge in epidemiologically necessary, but ecologically devastating, personal protective equipment. According to one study, 129 billion face masks and 65 billion gloves were used globally each month during the pandemic, as much as 75 percent of which are likely to end up in landfills or the ocean. Much of that equipment—including this mask being investigated by a curious California sea lion—is made from durable plastics that take hundreds of years to break down.

By BARB
We use cookies on our website to give you the most relevant experience by remembering your preferences and repeat visits. By clicking “Accept”, you consent to the use of ALL the cookies.
Cookie settingsACCEPT
Manage consent

This website uses cookies to improve your experience while you navigate through the website. Out of these, the cookies that are categorized as necessary are stored on your browser as they are essential for the working of basic functionalities of the website. We also use third-party cookies that help us analyze and understand how you use this website. These cookies will be stored in your browser only with your consent. You also have the option to opt-out of these cookies. But opting out of some of these cookies may affect your browsing experience.
Necessary Always Enabled
Necessary cookies are absolutely essential for the website to function properly. These cookies ensure basic functionalities and security features of the website, anonymously.
Functional
Functional cookies help to perform certain functionalities like sharing the content of the website on social media platforms, collect feedbacks, and other third-party features.
Performance
Performance cookies are used to understand and analyze the key performance indexes of the website which helps in delivering a better user experience for the visitors.
Analytics
Analytical cookies are used to understand how visitors interact with the website. These cookies help provide information on metrics the number of visitors, bounce rate, traffic source, etc.
Advertisement
Advertisement cookies are used to provide visitors with relevant ads and marketing campaigns. These cookies track visitors across websites and collect information to provide customized ads.
Others
Other uncategorized cookies are those that are being analyzed and have not been classified into a category as yet.
SAVE & ACCEPT